What Is Coffee Milk? Take a Sip of Rhode Island’s Concentrated Weirdness

What is coffee milk? It’s Rhode Island’s signature sipper. It’s chocolate milk’s quirky cousin. Here’s everything you need to know about the smallest state’s biggest contribution to the beverage world.

Rhode Islanders take particular pride in how unique their tiny little state is. It’s the misfit of New England, and that also applies to their cuisine. This is the state of “hot wieners,” “johnny cakes,” “frozen lemonade” and yeah, coffee for kids. Meet coffee milk, Rhode Island’s official state beverage.

What Is Coffee Milk?

If you’ve never encountered coffee milk, it’s like chocolate milk, only made with coffee syrup: a thick, sweet ambrosia made of concentrated coffee and sugar. Think of it like cold brew concentrate mixed with enough sugar to make your teeth ache. And combined with milk, it creates a drink that tastes like the finest melted coffee milkshake.

The origins of coffee milk are, like most things from the state that brought you H.P. Lovecraft, shrouded in mystery. One popular story is that in the 1930s, local diners started making coffee syrup by adding sugar to old coffee grounds. Others think coffee milk came from Rhode Island’s sizable Italian population—it’s not hard to imagine it evolving from the classic Italian caffè latte.

But unlike its caffeinated forebearers, it was marketed to kids as an alternative to chocolate milk. Something little Rhode Islanders could drink while their parents sipped their coffee.

The Secret’s in the Syrup

While you can buy premixed coffee milk by the gallon in Rhode Island, it’s harder to find outside of the Ocean State. Luckily, you can easily score some coffee milk syrup online.

Over the years, Rhode Island has had two major competing brands of coffee syrup: Eclipse and Autocrat. But in 1991, Autocrat bought Eclipse. (Although, you can still find both varieties on store shelves.) Autocrat also makes a third coffee syrup under the brand name “Coffee Time,” although that’s mostly sold outside of Rhode Island. If you want to choose between the three, they run in a spectrum from super sweet to still sweet but definitely tastes like coffee. Here’s a rough breakdown:

Autocrat: The sweetest of the bunch.

Not satisfied to merely market sweet, milky coffee to children, Rhode Islanders took coffee milk to the next level with a “coffee cabinet,” which is coffee milk mixed with ice cream. It’s basically a coffee milkshake with a stronger, richer coffee taste. (Why “cabinet?” Well, the story goes that the blenders used to make the shakes were stored in cabinets. But then, a ton of other things are stored in cabinets, so who knows? It’s like calling spoons “drawers,” but would that be too crazy for Rhode Islanders?)

And then there’s the coffee “Awful Awful,” the version of the coffee cabinet sold at the legendary Newport Creamery restaurant chain. Marketed with the disturbingly vague tagline of “It’s a drink!,” the Awful Awful is mostly known for the “Awful Challenge,” which rewards those who manage to drink three shakes in one sitting with a fourth one for free. It’s a rite of passage undertaken by many young New Englanders (myself included), who are willing to spit in the face of ice cream headaches.

How to Make Your Own at Home

Now, I’ll admit I’m not from Rhode Island. I was born and raised in Southeastern Connecticut, or as modern maps list it, “the Ass End of Connecticut.” And while Connecticut as a whole is the state equivalent of the Judge from Caddyshack, my part of Connecticut has more in common with any Rhode Islander than the residents of Westbury or Greenwich, who are really just New Yorkers with yards.

So, when I lived in Brooklyn and missed my hometown of Groton (submarine capital of the world!), the only comfort food that brought me that real New England feeling was coffee milk. I even had friends smuggle bottles of Autocrat over the border, before I could just order the stuff online.

These days, there are a bunch of coffee-flavored milk blends on the market from brands like MOO-ville and Friendly Farms. (Not to mention the MANY Japanese coffee with milk brands like UCC Coffee and Pokka Milk Coffee.) But if you want to try a delicious glass of original Rhode Island weirdness, grab a bottle of Autocrat or Eclipse and make it yourself. You won’t be disappointed. 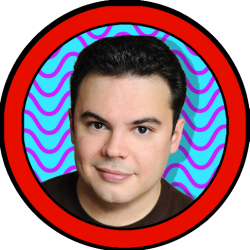 Jon is an L.A.-based comedy writer who's spent 95 percent of his life trying to decide which Ramen flavor to buy, only to go with "chicken." The other 5 percent? Mushroom.